Let me begin by confessing that I’m not a big fan of solitaire as a primary means of entertainment. I use the game as a way to hypnotize myself out of varying levels of annoyance. What drew me to this game was its dungeon crawler theme and the possible goodies that come along with it.

Card Crawl is one of those games that sucks you in with a free trial. If you are content with a game that can offer a challenging 2-3 minutes of arithmetic aggression a few times a week, then the “free” version of Card Crawl is definitely your poison. Some players boast this game’s mini-card building features and liken it to Magic: the Gathering.  I beg to differ. I’m not saying the game doesn’t give you the opportunity to take part in the 54 card deck of difficulties that you face, I’m saying that compared to real deck building the “mini” doesn’t do enough to differentiate.

The game is set up thus:  You are a young woman with armor and math skills in a dungeon pub playing cards with a drunk Minotaur named Harry…uh Hershel…what’s his face. You have to make it through a 54 card deck old boy is dealing out.  He deals the cards four at a time. You can use any  potion, coin, shield, or sword card dealt but once they are in hand they must be used. Your backpack can store one of any card except monster cards which can be eliminated by either using sword cards or taking damage. At least 3 of the dealt cards must be eliminated in order for more cards to be dealt.  Sounds simple right? But clearing the deck is not enough. The real objective is to collect gold coins. You can “sell” unneeded potions and items to the “shop box” (gold is just a loss). You need the coins to unlock ability cards and therefore be able to complete quests. 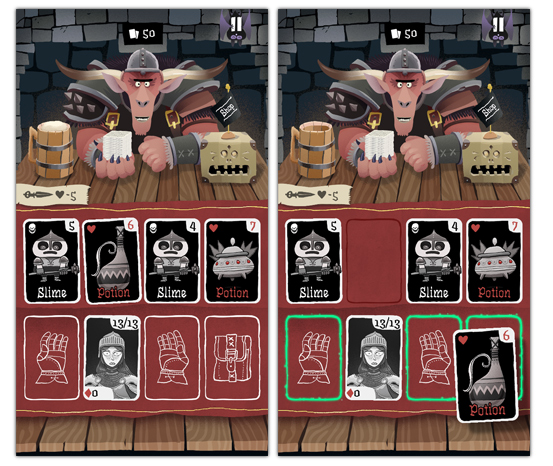 I soon found that I was not content with the meager allowance of ability cards of the free version. I had gold I couldn’t use and no way to complete the quests. I was pretty much forced to pay $2.99 ($3.25 after taxes) to see what else there was to offer.

The good news is that you only have to pay once. There are no in-app purchases to put more stumbling blocks in your way. For your cash you get access to all 30 ability cards, quests, the daily dungeon, and the option to choose which 5 ability cards will be available to you. Streak mode rewards you for successive games won but is only available after you have unlocked all ability cards.

Although your hero does not “level up”, completing each quest does give you a new avatar to play as,  including an “archer” and an “assassin.” The most recent update of the game introduced new cards and new dealers, which could mean new monsters.

Card Crawl is true to its base: a mobile card game in which luck and timing being essential to victory. The graphics are clean and colorful with interesting animations (especially the bug falling into Hoerni’s beer). One definite bragging point is the background sounds. Realistic laughter, jumbled conversations, and the tinkling of silverware and mugs definitely set the mood in the dungeon pub. I also found it interesting how your avatar card’s artwork changes as you lose hit points; going from full flesh to a skeleton when down to “1.”

If you are looking for a challenging solitaire game, you’ve definitely found it, just don’t get too excited about the dungeon crawler theme. It would be kind of cool if slaying certain types of monsters yielded special abilities based on the rarity of the monster or how many of them you have slain, instead of coin collecting your way into ability cards. The game is still being updated so maybe more intricacies  are in the future. And if not you still have a pretty good solitaire game with stimulating artwork.

Despite its good attributes I can’t rate it above a 3. Although there are no glaring faults or disappointments to note, the game fails to blow me away. A definite fit for the solitaire fanatic, Card Crawl is a holla-back game but before too long you WILL want to do something else.

A definite fit for the solitaire fanatic, Card Crawl is a decent game but before too long you WILL want to do something else.

Impish Noire is an enthusiastic gamer that is southern born and raised by Yankees. Ever heard a New Yorker's colloquialism said with a southern accent? Just ask.