Build and protect your zombie shelter from waves of the undead. Idle Zombie Shelter: Build and Battle is an idle simulation game that moves as slowly as the zombies themselves. Developed by Iron Horse Games, named after legendary baseball player Lou Gehrig, this title is a surprising strikeout. In contrast to the interesting company history, this title lacks originality and excitement. As with most idle games, Idle Zombie Shelter allows players to upgrade their shelter, weapons and skills. When not playing, coins will accumulate for you to collect later. This title relies on waves of dawdling zombies with the occasional boss. The goal is to defeat each zombie before they reach your shelter. Once they reach you, they will take health from your base by apparently exploding. You will lose the wave if your health drops to zero.

Waves will increase in difficulty, so it is important to upgrade your weapons and shelter. While in a wave, you can spend coins to upgrade your damage, rate of fire and defense health. Each zombie gives you coins, shelter materials or diamonds when killed. The currency is used for different upgrades. Unfortunately, this means it takes longer to get certain aspects upgraded fast enough. In order to start getting benefits for the shelter, you must upgrade to level ten. Getting enough shelter materials for this takes time. This only adds to how boring this title is and reduces what you can do from the start. Idle Zombie Shelter allows players to turn on automatic gunfire from the first wave. After a couple more waves, the option for “idle” is checkable, but it is unclear what it does. There are a few things in this title that are not clear. On the right-hand side during a wave, there are three abilities you can use. One rains fire balls down to hit all zombies on the playfield. The other two both increase damage. A little question mark tells you what these do, but there is nothing to help you buy more. Each ability has 15 uses when you first start, but no way of knowing if you get more. So far, they don’t appear to regenerate, and none are available in the shop.

Lack of features and clear instructions make the first few hours of this title incredibly routine. This doesn’t seem to improve after unlocking the first shelter or soldiers to help protect the base. While there isn’t anything wrong with pixel graphics, it only serves to make this game worse. Basic gameplay and graphics don’t improve the experience. Idle Zombie Shelter is a muted, dull game that needs to pick up the pace. The ability to increase the pace of the zombie hordes is locked under watching ads every ten minutes. That or paying real money to have the premium version. 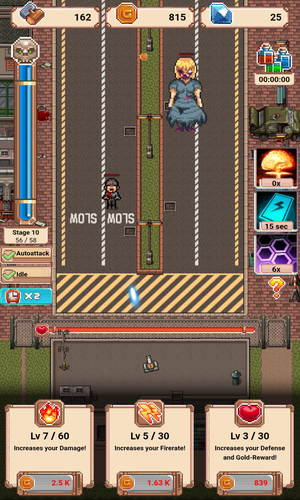 Idle Zombie Shelter’s idle wave battle isn’t a new concept. It is done almost too much, but this one really missed the target. Most of the game revolves around the waves so that should be the most exciting part of it. It’s not, especially the first ten or so rounds where your weapon kills them quickly. There is then the world’s slowest gap where nothing happens until the next group of zombies reach the strike zone.

Boss zombies are unique and one of the most interesting parts of the game. The second zombie boss, for example, looked like a giant baby doll. That’s what I’m guessing it looked like with the pixel graphics. Bosses appear at the end of ever five waves and will take all your health should they reach your base.

Overall, this title could use some speeding up and readjusting. A few little notes about what things are and how to get more would be nice. Idle Zombie Shelter manages to take a casual game and overdo it until it’s the perfect cure for insomnia. With so little to do and waves going ridiculously slow, this title can’t maintain interest for long.

Idle Zombie Shelter confuses casual and sleep inducing with a little too much likeness to the walking dead. With a massive speed increase, the simplicity of the title still wouldn’t stay entertaining due to confusing features.