Mobile gaming enables independent developers in a fashion that is unprecedented for the industry. With a huge existing install base and a distribution network already in place the only tasks an independent developer has are creation and marketing. This means that while there are dozens of major companies making mobile games and filling them with in-app purchases and pay-to-win schemes there are cadres of individuals or small groups composed of people motivated largely by an abiding love of gaming as well. At Hardcore Droid we try to put those smaller developers in the spotlight whenever possible as they are the people we want driving the future of mobile gaming, along with you devoted readers and gamers. Star Nomad is a case study in the strengths and weaknesses of the independent developer.

The story starts out with what seemed at first like a stolen plot device from the 90s film Johnny Mnemonic, but quickly transitions to a sort of joke or homage considering your character’s name is Reeves (Keanu Reeves played the titular character in the adaptation of the William Gibson short story) and the rest of the game is filled by similar references and nods. Your character is a pilot and courier, but when it comes to information rather than carrying stacks of hard drives he carries the data stored directly in his brain. After a quick introduction that involves amnesia and a promise to help return your memories later you are set loose upon the galaxy. What follows is an interesting tale with a few surprising twists that will satisfy even the most avid space opera fan.

The controls are simple; tap a direction to fly and tap your ship to stop. As you upgrade your ship to include various weapons and utilities there will be activation buttons on the left hand side of the screen.. The primary weapons of your ship are railguns which automatically target and fire at enemies. Only missiles, EMP (which temporarily knocks out enemy guns) and a powerful laser cannon that some ships can obtain require deliberate aiming or activation. There’s also a shield booster which will restore some of your depleted defense capacity. The shield booster, EMP and C-Beam (that laser cannon mentioned earlier) all take energy which is the only other real-time resource you have to monitor. As you buy new ships and upgrade your equipment you’ll have more weapons and greater defense capability. Combat is unavoidable, and can initially be a challenge, but by the end of the game is a breeze. Your first task before you can embark on the story missions is to amass enough credits to upgrade from the basic starter ship. There are two primary ways to make money. One is to accept missions, which range from courier drops to wiping out pirates. The other is an approach most video games ignore: mercantilism. Rather than a string of tense space battles this means paying close attention to chatter and rumors from other pilots. The commodities and resources you can traffic in are broad; if a system is low on food, stocking up on basic nutritional rations can make a tidy profit. The riskiest but most lucrative approach is to brave a pirate-controlled system and pick up some contraband, which is basically just whatever recreational space-drugs exist in the game world. Even if you survive the trip to the pirate base you still have to pray that no law enforcement personnel scan your ship before you can offload your illegal goods, because they will fire on you.

As was stated earlier, the combat can make gathering resources initially quite challenging. Early ships are smaller and more agile but have less weapon slots and lower shields. Though your railguns will never miss, pirate ships shoot a more traditional velocity-based projectile and a lot of fast maneuvers can make some of their shots go astray. Players who have a tendency to adopt the “white knight” approach and attempt to stamp out any pirates they see are likely to experience a lot of losses. Many times you’ll go after a single pirate fighter only to have it joined by several others and a missile frigate. There’s no save/reload option, but no real death either. Should your ship be blasted into space dust you hop into a handy escape pod and float in space until picked up and returned to the starting point. Unfortunately you’ll be set back a bit as you start in the original ship with approximately 75% of the value of your previous ship paid out via insurance. This means a savvy player will learn when to fight, when to ignore and when to run. Sadly once you’ve upgraded to a certain threshold, the combat becomes too easy. Rather than having to maneuver and evade, it’s possible at times to simply park the ship and activate the shield booster periodically. The game looks good and is satisfyingly crafted. A wide net of worlds connected by unexplained “jump points” leaves plenty of room for travel and exploration. The backdrop of each area is an interstellar landscape of planets, nebulae and asteroids. The ships look good as well with clearly differentiated designs for civilian ships, pirate ships and craft of the various factions. Unfortunately the pictures of the characters you interact with look like the first results of a “learn to draw anime characters” course. The game’s writing also suffers from an overall lack of creativity. Much of the dialog is too straight and to the point, lacking any sense of embellishment or style. This isn’t a huge surprise given that Star Nomad is a solo effort, but better character portraits and a stronger language style would go a long way to improving the atmosphere and depth of the game.

There are two in-app purchases, but for a free game made by one individual it’s hard to begrudge them putting their hat out. One removes advertisements and dumps a significant chunk of credits into your accounts. The other gives you a souped-up ship that can equip any item in the game but if it gets destroyed, you simply get a big chunk of credits. So if you’re tempted by the latter, be sure you have a good handle on the game before investing the real-world cash. With a few improvements Space Nomad could become an enduring indie franchise; a greater breadth of weapons, ships and equipment would propel the game towards a five star rating. As it stands now the game is a magnificent showing by a single individual. While the end-game is a little too easy at points the whole experience is as close to being Han Solo as you’ll ever get.

Though it suffers from a few stylistic flaws, Star Nomads remains a thrilling and tense game. 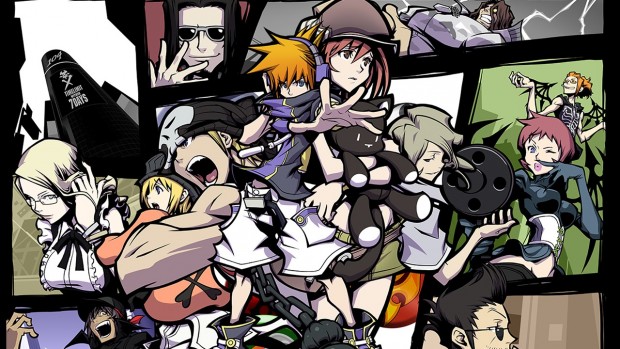 The World Ends With You Review