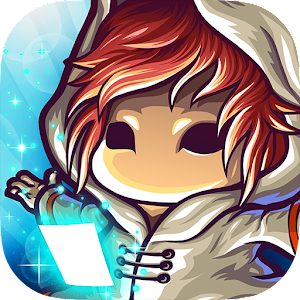 In the rather scant space of cartoon tower defense titles, the reigning titan that is Kingdom Rush exerts a gravitational pull of influence that pervades the genre. At first glance, Tiny Guardians doesn’t seem concerned with reaching escape velocity. Any Kingdom Rush player will quickly notice the similarities in the interface, class upgrade lines, visuals and wordless quirkiness.

Thankfully, the comparison ends there as the game play takes a different spin on tower defending. Instead of protecting the end of the path, the player protects a small hooded girl who leisurely plods along a Tolkien-esque journey like a tiny card-toting hobbit. The reason for this seeming suicide mission is left to 2 pages worth of wordless cartoons. From these, the player infers that the girl’s significant other is gone and she must follow the trail of magical bread crumbs through the increasingly unpleasant locales of her world. The story is relayed forward from there through two sentence pre-mission blurbs, creating a narrative which is nothing more than convoluted pretense to kill. Predictably, she is attacked by an array of menacing bozos, who the player must repel with summoned bodyguards inscribed on cards. The fantasy RPG gang’s all here, with a handful of derivations on mage, warrior and rogue all willing to ply their respective trades in escorting this mysterious card shark. In this regard, the game is somewhat unique, incorporating elements of tower defense with RTS. For the most part, the formula leads to some interesting hybrid gameplay. You spend mana, gained from slaying foes, to hire defenders, whom you direct to and fro during battles. Each character has intrinsic attributes like health, armor and damage as well as a skill, all of which are upgraded by spending mana. Both your warriors and the enemy monsters have strengths and weakness intrinsic to their kit and it presents a dynamic game of roshambo. Between managing the composition of your defenders, using spells to turn the tide of battle, planning ahead and positioning your units, there’s a stream of managerial tasks which create a thoughtful, well-paced experience.

However, the game is not beset with some flaws. As a seasoned game tactician, I found the challenge slightly lacking on hard difficulty. This is less than surprising as small patronizing details within the game come out to insult you every once and awhile. For instance, items that are not collected by you are automatically collected so why allow me to do so in the first place? Even worse are the events which move the game forward. They are usually “solved” by having a unit stand on an obvious glowing glyph. However, the game has low expectations of your intelligence so after a few seconds, it will resolve the issue for you. Not only that, the game doesn’t really let you be an armchair general either. For all my strategic acumen, I found my choices during the game to have minimal effect. Attempting to target individual units in a mob is impossible and moving units doesn’t always work well. Occasionally they will attack the closest enemy but they’re also prone to bouts of amnesia and will wander back to fight the enemy which were previously fighting. Worse is when they lose the will to fight and stand around aimlessly. When I had six soldiers buried under a mass of angry clowns, I found it far more effective to just drop a heal spell on them and let the melee resolve itself. Even in the scripted boss fights, which the bosses sport a big glowing area attack that you’re obviously supposed to avoid, units are so dull and so numerous, that I found it was perfectly fine to have them all die and heal them back alive. The choice of soldiers is not that demanding either. While Kingdom Rush necessitates a defined strategy and placement for the coveted three stars, Tiny Guardians is far more forgiving. This is especially true when utilizing the unlockable units later on where it was pretty hard to choose a composition that wouldn’t work.

Despite these shortcomings, I found Tiny Guardians to be pretty fun. The animations are smooth, it kept me entertained for long stretches and it provided a solid twist on gameplay that I hope can be refined in future releases. While there are some design elements I’d like to see ironed out, this could develop into a worthwhile branch on the fantasy tower defense tree.